The foundation of Sadhu Vaswani College was laid down by Sadu Vaswani Educational society on 2 Oct 1979 with the ideas of renowned visionary and social reformer Sadhu T.L Vaswani and blessings of Sant Shiromani Swami Hirdaram sahib ji. At that time, it was the need of the hour felt by the society with main focus on social service and entrepreneurship. Sadhu Vaswani Autonomous College (Govt. Aided) is situated in the capital city of Bhopal. It is affiliated to Barkartullah University, Bhopal and also recognized by UGC under section 2(f) and 12(B) of the act. Since inception, the college has adopted an integrated and comprehensive approach of learning to achieve academic excellence and quality education. The reaccreditation process by NAAC leading to “A” grade in 2014 itself reflects excellence in academic performance, capability of self-governance and enhancement in quality education. This is further complimented by autonomous status given to the college by UGC, New Delhi in 2015. The campus is known for its congenial atmosphere, excellence in curricular, co-curricular and activities. Strict discipline, mutual respect and adherence to ethical values is promoted to provide diverse for all round growth of individual. 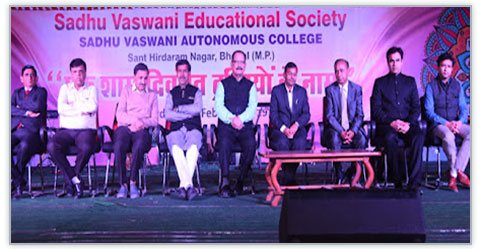 If Sindh was renowned as the land of Sufis, Saints and Fakirs, Indian cities with Sindhi population have gained fame of being the working ground of one or more famous sindhi saints, especially after the partition in 1947 when like other Hindus, most Sindhis were forced to migrate.It is over a century since one of the most renowned Sindhi Saints was born on 21st September 1906 at a small village Bhirya, of Nawabshah district, Sindh as the son of Indumati and Shri Sahajram Ji. As usual news of birth of a boy child brought a smile to the faces of family members, who were not aware that destiny had brought this soul on earth to make thousands and thousands of people had cheerful. The baby boy was named Ramchand.
Child Ramchand was not a normal human being. At the tender age of 14 years he was not finding worldly pleasures attractive and intending to move on the spiritual path of self realization, he became a disciple of famous saint Baba Hariram Sahib Ji .

This was his thrust to know self and serve humanity which resulted in taking Sansyas (renunciation) at the early age of just 18 years. His dedication to serve the master forced Baba Hariram Sahib to help and guide him to develop the attitude of understanding spirituality in the true sense. Looking at the faith of Ramchand in Lord Rama, Baba Hariram Sahib Ji suggested a new name Hirdharam (Jiske Hirday Mein Ram Ka Niwas Ho - Person having lord Rama in his heart) for him. During these years he along with Baba Hariram Sahib visited Haridwar several times, this gave him a strong urge to serve the deprived, and a genuine concern for Indian culture & ‘Sanskaras’. In 1948 Hirdharam Sahib Ji migrated to India and started his fieldwork at Jodhpur but soon shifted to Ajmer, eventually to Pushkar , by the year 1950 a small cottage at Pushkar became the activity centre of Sant Hirdharam Sahib.

In the year 1962 Sant Hirdharam Sahib Ji visited Bairagarh a small township of migrated Sindhis, close to Bhopal, capital city of Madhya Pradesh and was highly impressed by the love and dedication of local people. Native Sindhis requested for permanent stay of Sant Ji at Bairagarh Bhopal. In the year 1965 Sant Hirdharam Sahib Ji shifted to Bairagarh Bhopal. As a token of respect to his silent and sincere service to society the government of Madhya Pradesh agreed to and announced new name Sant Hirdharam Nagar to this area on 5th of June 1995.At Bairagarh Bhopal Sant Hirdharam Sahib Ji took initiative for the foundation of an NGO, which is presently known as Sant HIRDARAM SHIKSHA EVAM SAMAJIK VIKAS SAMITI, for the purpose of conducting educational, cultural and social works, with the vision of organized groups of local residents, both women and men, responsible as controller of their resources.

“Sacrifice is eternal whereas seeking material pleasure is root of all sufferings.” is the best expression for the enlightenment acquired by Sant Hirdharam Sahib Ji. All the teachings of Sant Hirdharam Sahib were central to the thought of serving the Lord Rama (God) in the form of suffering, needy and deprived class of human being. Entire life Sant Ji concentrated on working towards helping the deprived by appealing to the privileged to extend a generous helping hand for various benevolent activities in the field of health, education, patriotism and culture.At the age of 101 years, on the 21st December 2006 Sant Hirdhram Sahib Ji left the physical world at own Ashram in Bairagarh Bhopal.

Sadhu vaswani [Thanwardas Leelaram Vaswani] was born on 25th November 1879 at Hyderabad Sindh. Presently his birthday is celebrated as the "Meatless Day" throughout the world. His father Shri Leelaram Vaswani was a true devotee of "Devi Mata" and mother Varanbai had great faith in "Gurbani" and she used to get up early morning for path [recitation] of Gurbani. The childhood of the child was cared for and affected to a great extent by this religious atmosphere at home.The child was a genius, brilliant at studies even in very early days of schooling. At matriculation he stood first in the Sindh province. This was the effect of the religious atmosphere at home so that during student life besides concentrating on the school syllabus he also studied very deeply the Gurbani and Bhagvat Gita [Hindu Religious Books] and developed an attitude of faith with prayers; hence he always tried to inspire fellow students for prayers.

After completing M. A. he joined Metropolitan College Calcutta [Kolkatta] as professor and soon started working as the Principal of Dayal Singh college at Lahore [one of the biggest cities of present Pakistan]. During his career in the educational field he always concentrated on the character building of students because in his own vision "Character Building is Nation Building".This was evidence of his wisdom and deep studies of Indian religious books that he went to Berlin at the tender age of 30 to attend "World Congress of Religions". During this visit, everyone not only was impressed with the knowledge and understanding of Indian religions that he held but also succeeded in getting some companions for his future mission to help and heal humanity.

Death of his mother, when he was of 40 years, proved a revolutionary happening for his progress on the roads of spirituality. In those days he was busy with writing books and articles. His writing was so effective that even the very first article on the front page of Mahatma Gandhi's Young India was written by him. He was a strong believer of greater involvement of youth power for the nation building and thus at Rajapur established "Shakati Aashram" to him Shakati meant Spiritual vitality. His most notable contribution to society was the starting of the "Mira (Meera) movement" in the year 1933 in the educational field and St. Mira's College for girls only, in the year 1962 at Pune. His whole life revolved around one principle " Be strong, Be manly, Be Strong and spend your strength in the service of the poor and broken one." His spiritual life was a great inspiration from the Mira and all of his poetic expressions were dedicated to Lord Krishna now complied as "Noori Granth". In childhood one day he listened to the crying voices of animals at the butcher shop and from that day not only left eating the flesh food but also spent his life in inspiring people to leave flesh food eating. It is the effect of his efforts that today in most parts of the world his birthday is celebrated as "Meatless Day" and every year thousand take the oath to leave the habit of eating flesh food for the rest of life from that day.

Sadhu Vaswani was among the great educationists, spiritual masters and philosopher born in the Sindhi community. Government of India recognized his works and issued a postal stamp to honor him on 25th November 1969.